To raise awareness about the growing frequency and destruction of natural disasters, in 2009, the United Nations designated October 13 as the International Day for Disaster Reduction. This year, the focus is on older people who suffer disproportionately when disasters hit.

In 2005, 75% of the fatalities of Hurricane Katrina were over 60 while they made up only 15% of the New Orleans population. One-third of the victims of the Haiyan typhoon that hit the Philippines in 2013 were over 60, even though they represented less then 10% of the population.

Globally, our vulnerability to disasters is increasing from several factors. Firstly, as a result of climate change there is an intensification of extreme climate and disaster events. It is estimated that the number of natural disasters has increased from 200 to 400 per year in the last 20 years. Secondly, we are increasingly exposed to the impacts of such occurrences due to a growing world population and the concentration of people and infrastructure in exposed locations (on coastlines for example). 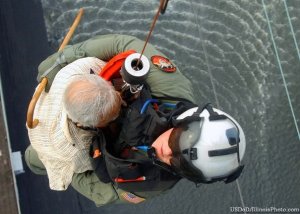 But older populations are particularly at risk. While the elderly live longer in many parts of the world it does not mean that they are in good health. With advancing age they increasingly face health conditions that reduce their mobility. 42% of Americans over 65 have a functional limitation that makes it difficult to evacuate them quickly. Health problems and the disruption of medical care can also be fatal in the aftermath of disasters. Around 100 million elderly people around the world live in abject poverty. This is  not only a developing country problem. It is estimated that 1 out of 6 elderly Americans lives in poverty. Many older people live alone, tend to be poor and isolated, and are therefore the most vulnerable.

Globally, some 870 million people, 12% of the world population, are over 60. It is predicted that by 2030, there will be more then 2 billion people over 60. “Older people bear the initial brunt of disasters often because they cannot flee,” said Toby Porter, from the HelpAge International, an international NGO that works to help address the challenges faced by older people.

Margareta Wahlström, United Nations Office for Disaster Reduction (ISDR), said: “The older person is often invisible in our communities until they show up in the mortality figures after a disaster event. Demographic change means we are living in an ageing world. It is important to include older persons in disaster management for both their improved protection and to make full use of their experience, skills and knowledge in support of that”.

An Age of Opportunity

While it is important to include the needs of older people in planning and preparing for disasters there may be a silver lining in involving them in the overall process. Older people have knowledge and experience that can be put to use for the benefit of the impacted communities and society as a whole. It would be a shame to let this potential go to waste.

UNISDR is the UN office dedicated to disaster risk reduction. It is led by Margareta Wahlström, the Special Representative of the Secretary-General for Disaster Risk Reduction and works to “substantially reduce disaster losses, in lives and in the social, economic and environmental assets of communities and countries.”

2 thoughts on “Why older people suffer excessively in Environmental Disasters”