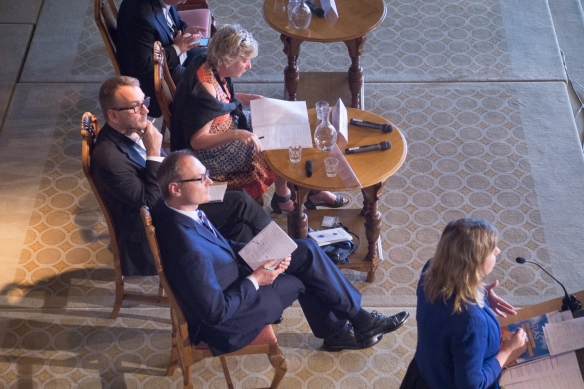 With over 1 million migrants and refugees arriving in Europe, 2015 saw the highest migration flow since World War II according to the International Organisation for Migration (IOM). The degradation of 25% of the most productive lands is forcing farmers and pastoralists to move in search of fertile soil and pasture. These population movements are causing tensions between communities, further degradation of lands and are resulting in conflicts.

The fifth edition of the Caux Dialogue on “Land and Security” thus focused on the potential for land restoration to mitigate migration flows.

In his opening keynote, former Secretary-General of the Club of Rome and Gorbachev Climate Change Task Force member Martin Lees, warned that: “failure to take urgent and aggressive on climate change represents a clear and present danger for humanity. The difference of a few degrees can mean our survival as a species”, he added.

With a quarter of human-emissions coming from agriculture, forestry and other land use, the potential for emission reduction and sequestration is enormous. Interestingly, in the US, this is leading to bi-partisan efforts into exploring how to maximize this potential despite political polarization in other areas. Can cooperation over land restoration become a catalyst for bi-partisan climate action?

A better understanding of what ignited the migration flows is a good place to start.

The Syrian example provides an excellent business case for analysts and geo-political experts. “The policy of promoting water intensive crops like cotton in a dry climate when you are suffering the worst drought in 900 years is a poor strategy” said Adam Koniuszewski from Green Cross. Water over extraction dried up the wells, widespread crop failures ensued and people from rural areas massively moved to the cities as a matter of survival.

For Dina Ionesco who is heading the Migration, Environment and Climate Change section at IOM, the problem is hence not voluntary migration but the forced displacement of people. This is what needs to be addressed and certainly something she understands given her family’s experience fleeing Romania as political refugees to France to escape the oppression of the Ceaușescu regime.

It takes 2,700 liters of water to make a single T-Shirt! Said Adam Koniuszewski

Forced displacement in Africa and elsewhere is often caused by land grabs. Andrea Staeritz, lawyer at Land Justice 4 West Africa, argues that the inability to enforce land ownership rights results in thousands of people being evicted from their lands and deprived of their livelihoods. Sometimes this results from European companies for palm oil plantations, for infrastructure projects or for reforestation projects that will end up in company CSR reports…

Thanks to forums like the Caux Dialogue on Land and Security, political concern and attention is growing for restoring degraded lands and halting desertification. Recent initiatives to promote constructive policymaking in this area include:

Around the world momentum is building for soil restoration. The Caux Dialogues and its partners deserve praise for providing an early platform to raise awareness about land degradation and for becoming an extraordinary catalyst for land restoration action and the scaling-up of solutions.

Many of the experts and practitioners that have contributed to the Caux Dialogues over the years have shared their wisdom and vision in “Reclaiming Landscapes for a Sustainable Future”, a book on land restoration by Martin Frick and Jennifer Helgesson. I am honoured for having been able to contribute a chapter on the impacts of military activities on soil and about promising remediation possibilities. The 600 page book can be ordered directly from the publisher Elsevier.

149 years ago on this day, the people of Upper Canada and Lower Canada came together to create one great nation, Canada.

“From the outset, Canada was formed not in spite of differences, but because of them. Thanks to the hard work and understanding between many cultural and religious communities, Canada is the diverse, inclusive, and compassionate country that we are fortunate to call home today”, said Canadian Prime Minister Justin Trudeau this morning.

Those words were echoed this morning by Canadian Ambassador to Switzerland Jennifer MacIntyre in her talk to the members of the Canadian-Swiss Chamber of Commerce when she said that “Canada is strong precisely because of the diversity of its people. This is not only a source of pride but the reason of our prosperity and success as a nation.”

I can certainly relate to this message. My family escaped the tyranny of the communist regime in Poland in the early 1970’s and we received a wonderful welcome in Montreal (Quebec). That is where I grew up and where my parents and brother still live and celebrate the “vivre ensemble” (Living together).

Four decades later, Canada still is a beacon of hope for refugees escaping the atrocities of the middle-east crisis. The Trudeau administration committed to take in 25,000 Syrians only to increase this number by tens of thousands soon after.

So many Canadians are willing to sponsor them that the government can’t bring them quickly enough. “Where are the refugees that you promised us? When will they arrive? We are waiting for them! is what I hear from the constituents in my Toronto riding” said Minister of International Trade Chrystia Freeland during the Forum of the Americas in Montreal two weeks ago.

And this constructive and solutions-oriented approach extends well beyond the refugee crisis. When the Canadian delegation arrived at the Paris Climate Conference in December, the assembly was chanting: Welcome back Canada! Welcome back Canada! and that was even before the climate minister Catherine McKenna voiced Canada’s commitment to maintaining climate change well-below 2 degrees.

At a time when the dark forces are shaking the world by promoting hate, fear and isolationism, there is a new wind blowing from Canada. One that is supported and celebrated by all Canadians. It is a message of peace and tolerance, a celebration of multiculturalism and diversity and a reason for the whole world to celebrate!

The promise of diversity

For a Carbon Tax by Stephane Dion

In the current migration crisis, people are fleeing to escape disaster, violence, poverty and hunger in  numbers unknown since World War II. But their desperate search for a better life is not always met with understanding and compassion. Hungary has set up a four meter-high barbwire fence along its Serbian border, Donald Trump is calling Mexican immigrants dangerous criminals, and Australia has implemented the world’s harshest policy by turning back boats of asylum-seekers, or forcing them to detainee centers on distant Pacific Islands and making sure they will never enter the country.

In the face of such hostility, it is refreshing to find a book with a different narrative. One where a country that promotes multiculturalism and social cohesion can enjoy the immense benefits of a more diverse society, where migrants truly become agents of progress and development. This was certainly our experience when my family immigrated to Montreal (Canada) in the early 1970s to escape the communist regime in Poland. Today still, Montreal is one of the most multi-ethnic and multicultural cities in the world – a vibrant platform for culture, education and business innovation.

“The Promise of Diversity” by John Hartwell Williams and John Bond, tells the unlikely story of Jerzy Zubryzcki (1920-2009), a Polish intellectual turned cadet officer in the Polish Army when the Second World War broke. Forced to surrender to the German forces, Zubrzycki escaped imprisonment thanks to a Jewish shopkeeper who may have saved his life. He served with distinction in the Polish Army, the Polish underground resistance and with the British  forces. Thanks to his good English, which he learnt at the Krakow YMCA, he was selected to join a top secret elite team that was tasked by Churchill to “set Europe ablaze”, he underwent intense training in parachuting, explosives, sabotage, intelligence work and extreme survival skills. He even became an expert in the art of silent killing. In a “James Bond”-like adventure, he brought a captured V2 rocket from Poland to Britain, providing crucial intelligence to the allied forces.

Unable to return to Poland after the war, he became a refugee and decided to study sociology at the London School of Economics. He then joined the Australian National University where he became Professor of Sociology. Having experienced the horrors of Nazi occupation, he dedicated the rest of his life to promoting the integration of Australia’s increasing ethnic diversity. Australia, whose population was 7.4 million at the end of the war, received more then 2 million Europeans in the following two decades. Today still, it is home to one of the largest Greek communities outside Greece (particularly around Melbourne). Later came waves of refugees from Vietnam.

Thanks to his distinguished war record and contacts in the upper echelons of British society, he was able to access and influence the closed circles of Australian government, and successive Prime Ministers, helping them realize that the ethnic diversity is not a liability but an asset and that by enabling these values we enrich society as a whole. Through his influence he managed to “steer Australia towards multiculturalist settlement policies” (The Australian) for which he as been credited as the “father of Australian multiculturalism”.

Zubrzycki also helped in initiatives towards reconciling Australia’s Aboriginal population  with the wider community, initiatives which caught international attention in 2008 when Prime Minister Kevin Rudd led a national apology to the Aboriginal community. His moving address can be viewed here:

As Secretary of the Australian Institute of Polish Affairs, John Williams developed a friendship with Zubrzyzcki, which led him to start writing this biography. John Bond, an author who has helped several Australian public figures write their memoirs, completed the book and is now organizing a Polish translation and promoting the Zubrzycki story in Poland.

John Bond is no stranger to diversity and multiculturalism. Since 1969, he has been a member of “Initiatives of Change” in Australia, the Swiss-based organization that facilitated the German-French reconciliation process following the Second World War. John was elected Secretary of the “National Sorry Day Committee” whose work led to the apology from the Australian government. He was awarded the Medal of the Order of Australia for service to the Australian community.

The book provides a wonderful account of how Zubrzycki’s early life experience of being rescued by a Jewish family shaped his belief in the value of diversity and turned him into a  champion of multiculturalism.

If Zubrzycki’s approach to multiculturalism were more widely understood, many of the troubles with migration and asylum seekers could be avoided. But given the unfortunate turn that policies towards foreigners are taking around the world, now more then ever, the Zubrzycki story is worth spreading.

Ordering “The Promise of Diversity” LINK