As “Powering Forward: What Every American Should Know about the Energy Revolution” becomes available for sale today, I am grateful to Bill Ritter, his team at the “Center for the New Energy Economy” (CNEE) at Colorado State University and to Fulcrum Books for providing a copy of the book for this review.

Bill Ritter Jr. knows a thing or two about the energy revolution and the sun that is setting on the fossil fuel industry. As Governor of Colorado, he turned the State into a leader in clean energy and then launched the “Center for the New Energy Economy” (CNEE) to help other states accelerate their transition to a clean-energy future.

Having hosted Gov. Ritter at the Geneva “Green and Inclusive Economy” Conference ahead of the Paris climate summit, I was familiar with his work as governor and at the CNEE including the need to address climate change, the cost of clean versus fossil energy and green jobs. All are well covered, as one would expect in such a book. But “Powering Forward” is different in that it goes much further to address the role of science and education, the need for well informed citizens for a functioning democracy and how biased and misleading media coverage has helped the climate denial industry. But his most important contribution is to shed some light on the government intervention versus the free-market myth and his attempt to turn a divisive energy debate into a consensual and bi-partisan quest for a better future.

The Myth of the Invisible Hand

For many, government intervention amounts to “corporate welfare” and invariably drives up costs for consumers. It may therefore come as a surprise that fossil fuels have been subsidized since 1916 and that American energy utilities have been run as quasi monopolies with no competition. While most will agree that governments should not pick winners or losers, thinking that energy markets are “free” is a misinformed illusion. The reality is that government still largely favours fossil fuels with obsolete policies from the carbon age that are slowing down innovation, artificially restricting consumer choice and undermining American energy security.

A good example comes from Georgia where the Sierra Club and the local Tea Party took on the monopolistic energy structure. It did not sit well with them that people could not choose where they get their electricity from and they forced a change in law to allow customers the ability to generate their own electricity and sell it back to the grid.

Business as usual is no longer an option. We are at the crossroad and must now decide if we will become the victims of our future or its architects. By working together and reconciling our differences we can turn scarcity into abundance and crisis into opportunity. This is the key contribution of Powering Forward.

– At $25 per megawatt hour, wind power is over 20% cheaper then natural gas

– The IMF estimates fossil fuel subsidies at nearly $2 trillion including external costs. Most of the income is received by the wealthiest according to the IEA

– US fossil subsidies amount to $2,180 for each man, woman and child annually

– The true cost of coal-fired power amounts to some $0.27/kWh

– 6 of the top 10 solar manufacturers are Chinese

– 9 of the top 10 wind manufacturers are non-US

Transformation of the global energy system forms the backbone of climate action. Without significant movement towards decarbonisation, the chances of keeping global temperature rise below two degrees celsius are low if not impossible. For Energy Day at the UN climate change talks in Paris, IRENA brought together scientists, policy-makers, business leaders and civil society to explore the future of renewable energy.

One obstacle remains the massive fossil fuel subsidies of some $500 billion (IEA). These figures increase to $5.3 trillion or 6.5% of global GDP if externalities like pollution are included (IMF WP/15/105). In some countries, energy prices are kept artificially low by policies that can cost up to 40% of total government spending. This is why Kuwaitis get to pay $0.22 per liter of gasoline (Feb. 29 2016) and that electricity costs as little as 1 cent per kilowatt-hour in Saudi Arabia. 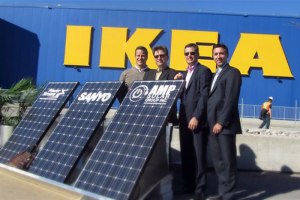 For Peter Agnefjäll, CEO of IKEA, it has become clear that we must grow within the limits of the planet. This positive impact on planet and people is behind IKEA’s decision to invest in renewables with the objective of becoming totally energy independent globally by 2020.

Civil society can help propel this transformation with initiatives for entire sectors of the economy. For Jules Kortenhorst from the Rocky Mountain Institute and the Carbon War Room,  is working on scaling up to reduce costs and accelerate the uptake of renewables  like sustainable jet fuels for the aviation industry, improving the efficiency of maritime shipping and also in buildings, thanks to IT solutions and big data.

Iceland provides a powerful business case for geothermal energy to heat and cool buildings in cities. For President of Iceland, Ólafur Ragnar Grímsson, such solutions have proven profitable without subsidies and provide a cost-effective path towards lower emissions. In 2010, 24 countries generated electricity thanks to geothermal power while some 70 use it for heating.

Adnan Z Amin, Director-General of IRENA, recognises that ParisClimat2015 represents a decisive moment for renewables. From now on, the connection between clean energy, the de-carbonization agenda and the safe climate imperative are inseparable.

Cooperation between civil society, the private sector and policy makers is key to accelerate this transition. 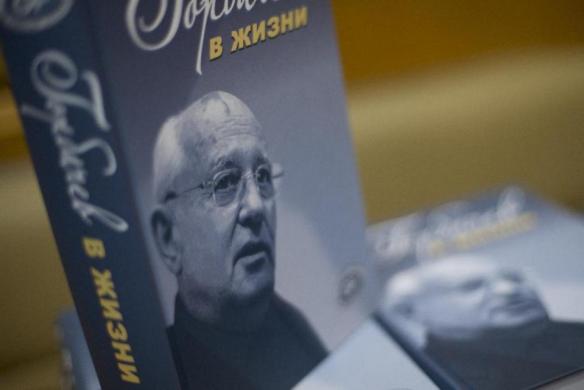 A few days ago in Moscow, Mikhail Gorbachev launched his latest book, “Gorbachev in Life”, a 700-page collection of memories and documents from him and others about his life experiences and the way his glasnost (openness) and perestroika (reform) policies have transformed the world hoping that the book would help Russians better understand their current history.

As he celebrates his 85th birthday, the National Security Archive at George Washington University (www.nsarchive.org) has just released this morning a series of previously classified British and American documents with Western assessments of Gorbachev starting before he took office and until end of the Soviet Union in 1991.

Manifesto for the Earth

But one book that sheds light on Gorbachev’s commitment to the environment and social justice is his “Manifesto for the Earth”. Few would know that when he became Secretary-General of the Soviet Union in 1985, he got access to information about the scale of pollution coming from chemical plants and factories that were poisoning the environment and sickening people. One of the consequences of the glasnost reforms was access to previously classified information. As a result, the soviet people demanded action and over 1,300 of the most polluting plants were closed.

This is how President Gorbachev understood the power of civic engagement and the need to change the relationship and reconcile humanity and nature. Well before the fall of the Berlin Wall he called for the creation of a “Red Cross” for the environment. This idea was then raised during the 1992 Rio Earth Summit. Given the mounting crises of climate change, environmental degradation and social inequality, civil society leaders called for the creation of a Green Cross and for Gorbachev to lead this effort.

This is how Green Cross International was launched in 1993. Today, Gorbachev is still at the helm of the organization as its chairman and Green Cross continues to work on addressing the challenges of security, poverty eradication and environmental degradation. With offices in some 30 countries, activities around the world and initiatives like the Earth Charter International and the Earth Dialogues, Gorbachev’s Green Cross story is still in the making.

Through his Manifesto for the Earth, Gorbachev describes how the story began and his quest for peace, social justice and a sustainable future for all. 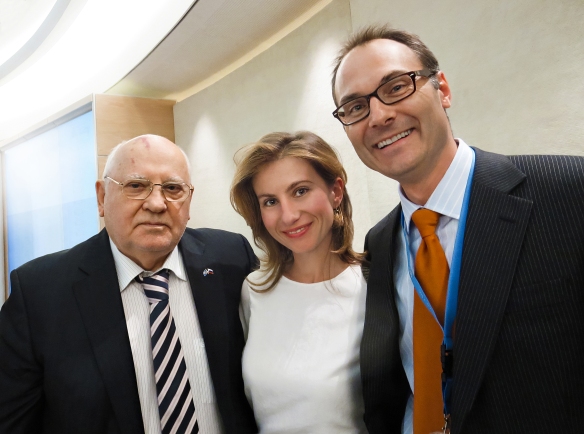 After an article about the role of science for good and evil (Bronowski on Science and Human Values) I now explore how robots will take over most jobs and ask myself why this takeover needs to be subsidized by our taxes.

The old debate about automation and employment (ref. Luddites in 19th Century England) is taking new proportions as most jobs, including white-collar jobs are now at risk. In the US close to 50% of the workforce is in danger of being replaced by computers and robots. In the UK 35% of jobs could be gone within two decades.

Humans, Robots and the Tax Code

Robots can work 24/7 and during holidays (excluding maintenance and repairs – the equivalent of our holidays and sick leave). But a more perverse advantage is granted by the tax code through generous breaks link accelerated and even bonus depreciation as well as various credits that help reduce the upfront cost of robots. Labor in contrast is hit by punitive taxes through social security, unemployment, medical, pension, insurance and other forms of taxation that discourage employers from hiring people and paying decent wages.

With a global workforce of 3 billion and 200 million unemployed (2012), the robot revolution will exacerbate inequalities between owners of capital and those who rely on wages for their livelihood and dignity. 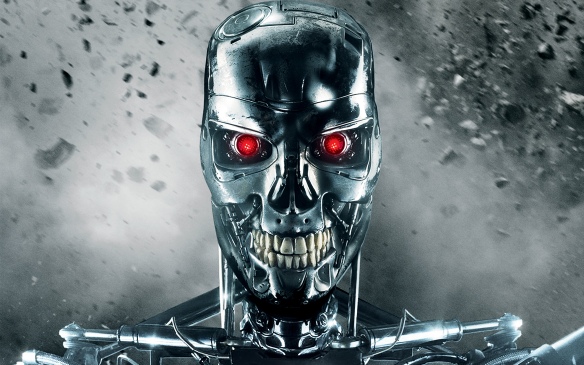 Bill Gates, Elon Musk and Stephen Hawking have joined 1,000 eminent scientists in a petition warning about the dangers of developing robots and artificial intelligence that can learn emotions and develop a conscience. They fear this could be our last invention as robots, having developed a Darwinian instinct would then turn against us.

Subsidising the transition to unemployment and misery

The robot revolution may be inevitable but I wonder why this transition to mass unemployment and human misery must be accelerated by government policy and funded by us, individual and human taxpayers (mostly through employment and personal income tax ). In 2010, 82% of US Federal Tax revenue came from individuals and payroll taxes, only 9% from corporations…