After over 20 years of climate talks, 195 countries reached a “universal, fair, dynamic and binding agreement” to “save the planet” by keeping global average temperature rise well below 2 degrees. The mood was euphoric and some delegates were in tears after the three sleepless nights that concluded ParisClimat2015. Having followed the preparations of this global forum, I was impressed by the efforts of the city of Paris, the French authorities and particularly by the personal engagement of the French President for an ambitious and historic outcome. 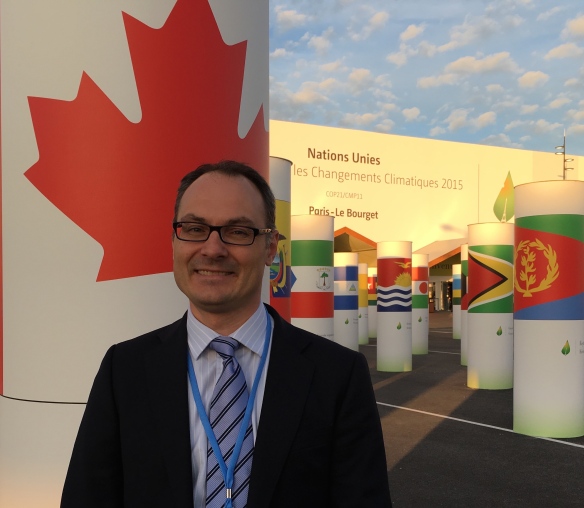 I am proud that Canada, after a decade of obstruction and denial under the Harper administration, has come out in favor of a 1.5 degree objective under the leadership of newly-elected Justin Trudeau. Staying “well below 2 degrees” is now the stated target of the world community and Canada is back as a constructive force on the world scene. This leadership will be needed to if we are to turn this lofty objective into something meaningful in terms of climate action.

The 1.5 degree goal reflects calls of small island states, climate scientists and civil society but the new ambitions do not yet translate into commensurate actions that would even have a remote chance of meeting the original so-called “safe” target of 2 degrees, let alone 1.5 – which would require much faster reductions in green-house-gases and methods of taking back some of the carbon that has already been emitted.

Scientists have been warning that there is a time lag between the moment when carbon is released and the resulting temperature increase. This means that on top of the 0.9 degrees of warming that we are already experiencing, there is an extra 0.6 degrees that is already pre-programmed for the future – Dr. Thomas Frölicher, researcher at the Swiss Federal Institute of Technology has produced some interesting work in this area. For these reasons, in time we will reach the 1.5 degree target and beyond as we continue to burn carbon.

Commitments by member states for COP21 put us on the 3 degree or more path. Well above the 1.5 degree goal. It is therefore urgent to transform this new target into meaningful policy, to change business models and make sure that we all change our behaviors – something that is far from achieved and which implies much deeper emission cuts then was is currently planned.

Delegates and politicians still think that climate change is a slow, gradual and linear process. This is not supported by science. In fact, the process is not-linear and there is now a real risk of hitting tipping points that could accelerate climate disruptions with catastrophic consequences. This is why the 2020 entry into force and the 5-year reviews that would start in 2025 are disappointing.

All countries will have to participate in the carbon reductions but rich countries must help to finance this transition in the developing world by contributing a minimum of $100 billion per year starting in 2020 – a figure that will be revised upwards in 2025. The good news is that new powerhouses like China and South Korea will contribute to this effort. It is also encouraging that countries like India will adopt a low-carbon path for their development, something that was far from achieved just a few days ago.

One message from the COP is  that the good days of the fossil fuel era are behind us. Fossil fuel subsidies should be phased-out and we will move towards a price on carbon to speed up the transition to a clean energy economy.

As Chinese President Xi Jinping said at the opening of COP21 on November 30th, this agreement is just the beginning of a process, echoing warnings from British Climate Ambassador, Sir David King, that carbon reduction targets must be reviewed regularly to accelerate the transition to a low-carbon future. From where we stand today and despite decades of work, it sure seems that we are still at ground zero.

3 thoughts on “COP21: more than expected, short of what’s needed”