As the Paris COP was resting following the release of its week one draft, Green Cross organized screenings of “In Pursuit of Endurance”, a documentary of the 2014 expedition by adventurer and financier Luc Hardy to commemorate the centennial of the cross-Antarctic voyage by British hero explorer Sir Ernest Shackleton. When Shackleton’s vessel stalled, stuck in the polar ice, he went on an epic rescue mission that saved his crew from certain death.

On the sidelines of the climate talks, Green Cross organized parallel screenings of the film at the Grand Palais in Paris and the Naturelia fair in La-Roche-Sur-Foron (near Geneva) to raise awareness about climate change to audiences beyond the traditional climate negotiation communities. 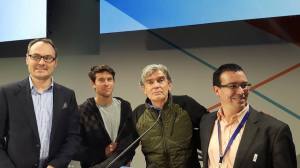 This is also an objective for Luc Hardy and why he invites artists, athletes, the media and young people to join his trips and spread the word about the climate crisis but also about the beauty of the natural world. This message comes through in the film with images of 300,000 penguins playing in the snow and observing with interest the expedition crew.

There is also a close link with the world of sport, especially for those who love and want to protect the beauty and integrity of the natural world. The trip allowed Swiss-snowboard champion and Green Cross friend Geraldine Fasnacht to do just that with images of the first ever ride off the Zavodovski volcano on Sandwich Island. Let’s hope this inspiration also helps the Paris COP negotiators reach a first ever ambitious and binding climate agreement. Our ability to continue enjoying such adventures will largely depend on what happens in the coming days.