On Sunday the IPCC issued its latest report with a new message to the international community and to investors and the business community in particular that reducing emissions to zero is an affordable option and that climate inaction will cost much more. UN Secretary General Ban Ki-moon said that: “Science has spoken” and to pension funds and investors that you should “reduce your investments in the coal and fossil fuel economy and move to renewable energy”.

The IPCC presented the case for reducing emissions  to zero as the coherent way forward from a scientific and economic point of view and the only way to reduce global poverty. Rajendra Pachauri, chair of the IPCC stated that: “The solutions are many and allow for continued economic and human development. All we need is the will to change.” The IPCC suggests that the cost of reducing emissions to keep temperature increases below the 2 degree threshold would reduce consumption by 0.04 to 0.14%. This modest impact is much lower then generally assumed and a fraction of the expected impacts on the economy if climate action is delayed. UN Secretary General Ban Ki-moon said: “There is a myth that climate change action will cost heavily. But I am telling you inaction will cost much much more.”

US EPA and the Cost of Inaction

The IPCC echoes the latest message from the US Environmental Protection Agency (EPA). Just last week it released a video warning about the intensifying climate change consequences experienced in the USA. How extreme weather events, floods, droughts and rising sea levels already affect the lives of Americans. Impacts on water availability, agriculture and food security, and increased risks to health are raised. Examples like Hurricanes Sandy in 2013 ($65 billion) and Katrina in 2005 ($125 billion), and the latest drought that threatens water supplies in California, Arizona and Nevada with Lake Mead experiencing its lowest water level ever, raising the need to ration water for drinking, agriculture and energy production support the case for urgent action. Throughout, emphasis is on the economic cost of inaction:

Until recently, the climate debate in America and elsewhere was presented as a choice between the environment and the economy. With the multiplication of extreme weather events resulting from less then 1 degree Celsius of warming and their impacts on lives and the economy, it is becoming clear that this is a false choice.

The Stern Review and the Economics of Climate Change

In 2006 already, former World Bank chief economist Nicholas Stern warned that the benefits of strong and early action on climate change greatly outweighed its costs and that the threats to human life – access to water, food, health and the state of the environment – were immense. In 2013, at the World Economic Forum in Davos, Nicholas Stern confessed: “Looking back, I underestimated the risks” but emphasized the economic opportunity of ambitious climate action. Significant reductions in green house gas emissions can be achieved at a profit (!), helping mitigate climate change while creating jobs and growing the economy.

McKinsey conducted one such study of the costs and opportunities of reducing emissions. On the vertical axis we see the cost of various measures to reduce Green House Gases (GHG). As we move from left to right we begin with the most interesting ones (lowest cost) and to the right we have the more expensive ones. On the basis of this analysis we should therefore prioritize LED lighting, energy efficiency and some second generation biofuels. Measures such as Carbon Capture and Storage and nuclear are however much less interesting in terms of cost efficient carbon reduction measures. Despite its limitations, the study provides an interesting method of prioritizing climate action measures in ways that realigns the false choice between economy and environment. 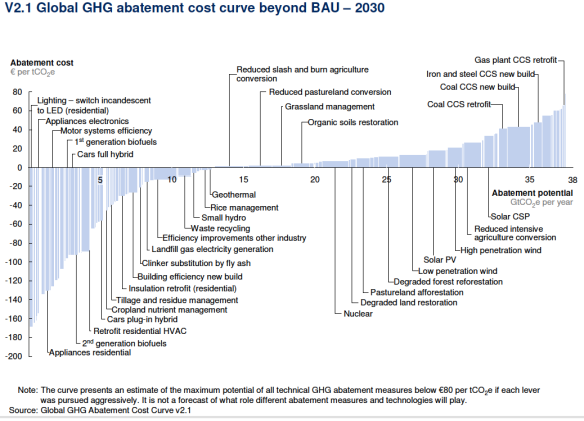 4 thoughts on “Latest IPCC Report, the US EPA and the Cost of Climate Inaction: Reframing the Debate”