Land degradation is one of the great challenges of the 21st century. Drought and desertification destroys 12 million hectares a year (an area the size of Greece) and impacts 1.5 billion people – mainly the poor and underprivileged. It is mostly caused by human activity: poor agricultural practices, intensive farming methods that remove soil nutrients, flood irrigation, chemical pollution, etc. We are now running out of healthy soil, so critical for ecosystems to support life and human development. 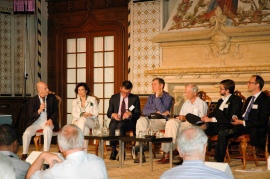 I was recently a guest speaker of Luc Gnacadja (Executive Secretary of the UN Convention to Combat Desertification) and Martin Frick, the conveners of the Caux Forum Conference on “Land Degradation and Human Security”. Human rights activist Bianca Jagger opened the session with a keynote emphasizing that environmental, social and economic challenges are all connected. She noted that the dramatic weather conditions we are experiencing today are the result of “only” 0.8°C of warming – questioning how political leaders can say that 2°C of warming would be safe. Our lack of action to curb emissions puts us on a path towards much higher temperatures, climate disruptions that are impacting ecosystems, water and degrading productive soil around the world.

The good news on land degradation is that there are solutions and they do not require high technology or large investments as many would think. With just a “pocket knife” Tony Rinaudo explains that we can bring back to life trees and vegetation in areas that were turning into deserts. He says that it is not the average climate change temperature rises that are a problem but the extremes. Just one day at 46°C is enough to fry an entire annual crop as the temperature concentrates at ground level reaching a scorching 70°C! But trees can provide protection from such extreme temperatures, they maintain moisture, increase biodiversity, can help protect crops from pests and can dramatically increase yields. Reforestation can provide hope to the entire African continent.

As Allan Savory says in ancient times herds of animals were protecting lands from desertification. These herds are now gone and the land is degrading. Allan suggests that the use of cattle to “mimic” nature, a process called “bio-mimicry”, can help restore degraded lands. Check his TED talk: 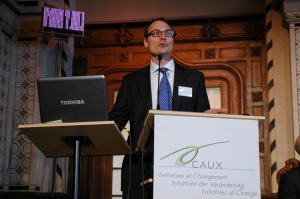 We often forget the long-lasting impacts on land of armed conflicts. The Gulf War resulted in the largest terrestrial oil spill in history and has permanently contaminated Kuwait’s groundwater. Industrial activity and toxic chemicals pollute water, soil and impact the lives of millions. Globally, obsolete pesticide stockpiles of 5 million tons are awaiting destruction. Their safe elimination will cost €20 billion and require the cooperation of civil society, governments and the private sector. More on that soon.

Yes, human activity has created these problems and time is running out. But through ingenuity and cooperation we can still repair and restore degraded lands and ecosystems. Even some of the worst impacts of climate change can be avoided. Innovative, low-tech and low-cost solutions are available. Their deployment at scale requires greater awareness and concerted action between government, business and civil society. The Caux Forum has become an important global platform to make this happen.

Those were my thoughts on this issue, I am looking forward to hearing yours.